Escape from the dungeon and make enemies join your team! But be careful ... if you and your allies fell apart, they will explode! Well, that could be benefits for you ...

Starting from B4F of a dungeon, you need to survive and reach the outside, located in 1F. Fortunately, whenever you defeat an enemy, they will become your ally and fight for you.

Tileset on the "thanks for playing" page by Gif: https://gif-superretroworld.itch.io/free-pack

Sweetie slimes. They are your first friends.

Power-up'd versions of Slimes. Uses a charged attack when they are enemies.

Ranged (range: 10). Very deadly if not handled correctly, but also a superpowered ally.

Following figure describes the special behavior of slimes. They can link with each other within a specific range (2), but will explode if lost connection to player or other mobs (Knights do count). 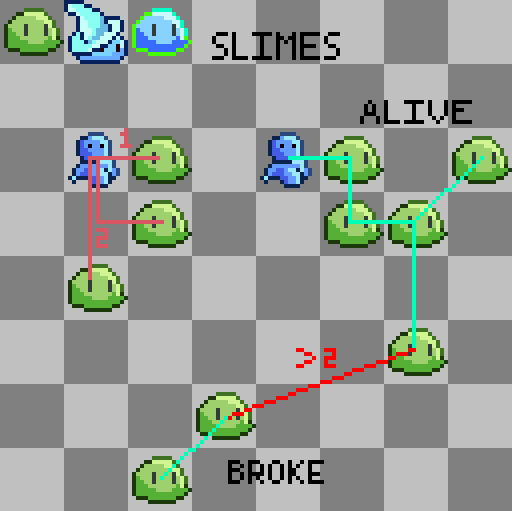 They use an AoE attack, also will charge and rush when they are enemies. As an ally, they are tough shields (really ?).

The final boss of this game. A power-up'd version of knights, who uses a wider AoE attack and rush less often than knights.

Don't worry! The game is designed to be playable and won't stuck itself (tho it may not be true due to design misses). You can: 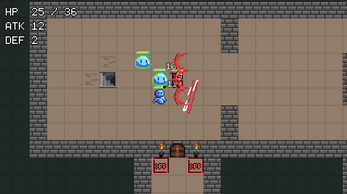 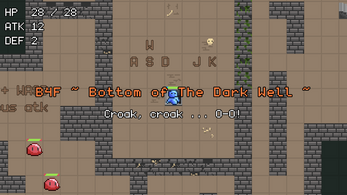 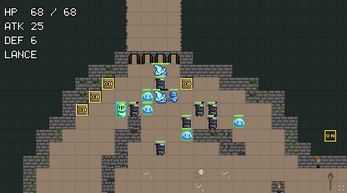 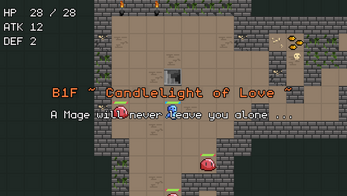